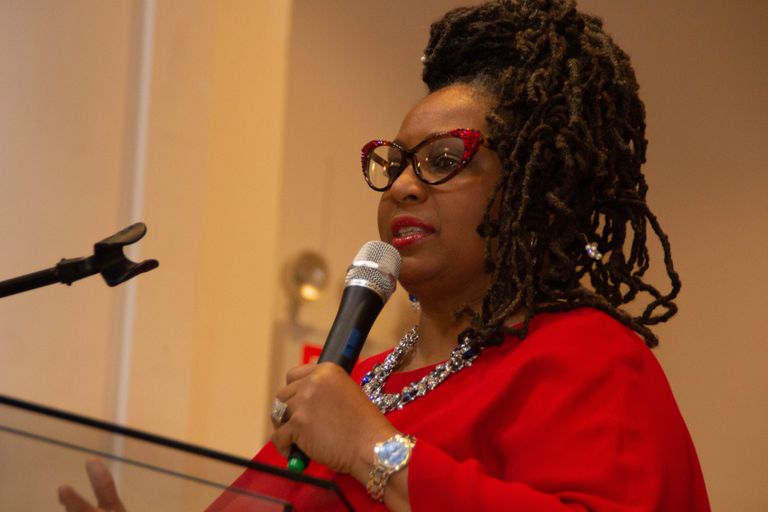 Beverly Bruin is a member and leader at Bethel Gospel Assembly Inc., where Dr. Bishop Carlton Brown is the Senior Pastor. She obtained a Bachelor's degree from Hunter college in Communication and Social Work, is Co-Director of SWAP, CEO & Owner of B Unique Event Planning, Fashion Coordinator, crafter, loves to travel and her proudest achievement was being awarded as the first recipient of The Distinguished Mother of the Year Award, presented by Claflin University.

Today, she is most grateful for life, after surviving a recent massive heart attack that almost took her life. As "a walking miracle," as she is often referred as today, her journey has shifted to her health and teaching others about health, primarily as it relates to heart disease and its prevention.

Beverly currently resides in Roosevelt, NY with her two sons Robert and Cameron.

Beverly Bruin and her sons Cameron and Robert

On the sunny afternoon of Monday, September 28, 2015, I suffered a massive heart attack.  Through the grace and mercy that God showed me, I have made a full recovery. I am now dedicated to teaching others about heart disease and its prevention as a HeartSmarts ambassador.

As an African American woman, I am committed to making daily choices to improve my health and my heart, it is my prayer, my hope and my desire, that the hand of God, and the platform and guideline set forth to teaching the HeartSmarts program, will empower me to be an ambassador that will have something life changing to say, that will help others to make changes to do better with their health, as I walk through this great and effective door to serve.

My Story Featured on NY 1

In 2016, I completed the HeartSmarts Ambassador training at New York Presbyterian Hospital/Weill Cornell Medical Center. Since completing the training, I have successfully taught numerous HeartSmarts classes in Harlem and Queens. Through HeartSmarts, I have truly turned my test into a testimony.

Dr. Naa-Solo Tettey, MPH, MCHES aims to reduce the incidence and increase awareness of cardiovascular disease in underserved communities. The goal is to educate individuals, families, and communities about heart disease and its prevention. Through HeartSmarts the hope is to establish a coalition that will partner with educators, clinicians, and researchers in developing and implementing cardiovascular health outreach programs.

Find out more about the Heartsmarts program

Diabetes, smoking, high blood pressure, high blood cholesterol,  physical inactivity, obesity and a family history of heart disease are  all greatly prevalent among African-Americans and are major risk factors  for heart disease and stroke. What’s more, African-American women have  almost two times the risk of stroke than Caucasians, and more likely to  die at an earlier age when compared to women of other ethnicities.

Here are a few unsettling stats:

The Heart of a Man

The purpose of the HeartSmarts Heart of a Man program is to provide a safe space for men to discuss health issues that are specific to them.

HeartSmarts Part II Closer to Plant-Based focuses on the positive impact of a whole-foods plants based diet on improving health outcomes.

Parishioners at Van Nest Assembly of God Church in the Bronx, NY experienced positive results through the HeartSmarts program.

Seniors at the Robert Couche Center learned about heart disease and its risk factors and made positive changes.

Cooking with Bev Part One

What's something exciting your business offers? Say it here.

A video of appreciation created for Beverly by members of her HeartSmarts teams.

Before and After: Beverly's HeartSmarts Testimony

Say something interesting about your business here.

What's something exciting your business offers? Say it here.

My Plant Based Journey Continues

Give customers a reason to do business with you.

I Never Knew Salad Could Taste So Good

Class participants through the leadership of Sis. Beverly learned to prepare and enjoy healthy salads.

Hands-Only CPR Can Save Lives. Most people who  experience cardiac arrest at home, work or in a public location die  because they don't receive immediate CPR from someone on the scene.

How to Give Hands-Only CPR. If you see a teen or adult  suddenly collapse, call 911 and push hard and fast in the center of the  chest to the beat of any tune that is 100 to 120 beats per minute.  Immediate CPR can double or even triple a person's chance of survival.

The HeartSmarts program began in 2011 with the hopes of educating communities about cardiovascular health in a unique way.

The HeartSmarts Faith-based Cardiovascular Health Education Program at The Ronald O. Perelman Heart Institute was developed by Naa-Solo Tettey, EdD in partnership with Holly Andersen, MD. The purpose of the HeartSmarts program is to reduce the incidence and increase awareness of cardiovascular disease in underserved communities. The goal is to train faith-based ambassadors of health who will educate their congregations, families, and communities about heart disease and its prevention. Through HeartSmarts the hope is to establish a coalition comprised of leaders of faith-based organizations who will partner with educators, clinicians, and researchers at The Ronald O. Perelman Heart Institute in developing and implementing cardiovascular health outreach programs.

HeartSmarts has been recognized as a model for community based health promotion. A major accomplishment for HeartSmarts in 2016 was having the first research paper from the program titled, “It's Like Backing up Science with Scripture": Perceptions of HeartSmarts, a Faith-based Cardiovascular Health Education Program, published in the Journal of Religion and Health. HeartSmarts has also been presented at national conferences including, The American Public Health Association annual meeting, The 7th Annual Health Disparities Conference, The National Wellness Conference, and the Association of Black Psychologists annual meeting. In addition to this, partnerships have been formed with community organizations including The NAACP, The Bowery Mission, The Northeastern Conference of Seventh-Day Adventists, and The New American Chamber of Commerce.

Enhance Your Wellness. Enrich Your Life. Schedule a HeartSmarts Class or Seminar

Please contact me to schedule a HeartSmarts class or seminar for your organization.